Lanterns
The Lantern making sessions at the Hub will be going on this month on Saturday 16th November between 2 and 4.30 and on Saturday 23rd November between 10 and 12.30. This is all in preparation for the big event which will take place on Saturday 30th November starting at 6.30pm. We are all hoping that the weather gods will look kindly upon us.
Talks
We have two speakers booked for next year. Both will focus on local themes. The Rev. Nicholas Pearkes will be talking about the boot making industry of Ipplepen and Broadhempston and Colin Vosper will focus on the Devon marble business of the nineteenth century. A third speaker is to be arranged. 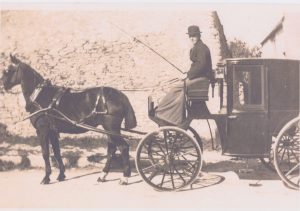 Here we have a picture of Harry Baskerville who was coachman to the Fletcher Robinson family of Parkhill in the early part of the twentieth century. It is well attested that when ‘The Hound of the Baskervilles’ was published Bertram Fletcher Robinson gave Harry a copy with his (Bertram’s) own signature and apologies for using Harry’s surname. It is accepted that Harry was the coachman who transported Bertram and his friend, Arthur Conan Doyle, across Dartmoor in March 1901 and it does seem that this trip sowed the seeds for one of the most famous books of the Sherlock Holmes canon. Bertram gave his friend the idea for the book and this was acknowledged in early editions.
Harry Baskerville had been brought up in Combefishacre and was living at 2 Wesley Terrace Ipplepen at the time of Conan Doyle’s visit. He later moved to Ashburton and lived on until his eighties. Some have poured cold water on this tale by pointing out that Baskerville is a well-known typeface and font and Conan Doyle would undoubtedly have been familiar with it, but it is more probable that Harry’s name had a ring to it which appealed to the writer.