IPPLEPEN LOCAL HISTORY GROUP
VILLAGE HALL TALK
We had a good audience for our October talk where Dr. Todd Gray updated us on all the issues surrounding the catastrophic fire in Cathedral Yard, Exeter, which resulted in the complete destruction of the Clarence Hotel. The talk started off more like a news report as Dr. Gray explained how he found himself thrust into the media spotlight as the expert who could explain the historical context of the event. It was made clear that Dr. Gray was less than happy with the response of the Council and the owners of the site to the ongoing mess but being a good historian he was inspired to take a greater interest in the surrounding buildings and research the fascinating history of St. Martin’s Island. St. Martin’s Island refers to a rectangular block of land just across the Green from Exeter Cathedral, bounded by the High Street, Broadgate, Cathedral Yard and Martin’s Lane. With the aid of some excellent photographs we were given some entertaining insights into the world that lies behind those familiar shopfronts on the High Street.
ARTHUR FRENCH MEMORIAL PRIZE
There were some excellent historical skills on display at Ipplepen Primary School this month. Competing for the annual trophy awarded by the Ipplepen Local History Group the children were set the challenging task of comparing the lives of children in the past with their own lives today. Part of the project brought over one hundred grandparents into the school to share their memories. The overall prize this year went to Harry of Year 4 for his moving account of the life of a young chimney sweep in Victorian Britain. 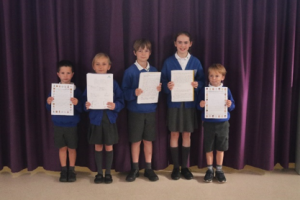 L-R: Frank Year 2, Lexxi Year 5, Harry Year 4, Martha Year 6, Benjamin Year 1
LANTERNS
The annual Lanterns procession has become part of our build up to the festive season and rather than dismantling your fabulous creations you are invited to bring your lanterns along to our carol singing round the tree on Friday December 20th at 7pm.
APOLOGY
In last month’s edition I put in a photograph which I claimed was Harry Baskerville. It has been made clear to me that the photograph was of Harold Jordan who fought in the First World War and who later became our village postman. I apologise for any upset that occurred.