From time to time I get asked about the origins of our village pump in Fore Street and William Field to whom it is dedicated.

At the time of his death in 1868 William Field had not spent that much time in Ipplepen. His home was Barton House on Edgelands Lane which was still not quite complete. The six-acre estate there included a quarry and it is this which would have excited his interest in our area.

Field was a Londoner and was described as a builder and a master marble mason. By the 1850s he was at the top of his game and was known as a building contractor as well as a marble mason. He worked with Sir Charles Barry and Edward Barry on the rebuilding of the Palace of Westminster. His company also worked on the Albert Memorial Chapel at Windsor. 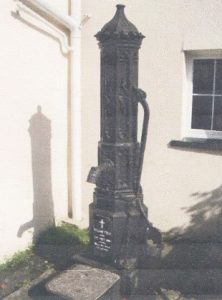 In both enterprises he would have come into contact with high quality red and grey Ipplepen Marble which was rare and highly prized. At the time of his death he owned properties in London and Winchester as well as Ipplepen and his estate was worth £18,000 (about £2million in today’s money). His daughter Naomi and son-in-law William Thorpe lived periodically in Barton House after it was completed. There is a stone in the floor of the entrance hall at Barton House marked ‘W.F 1868’ and there are several fireplaces made with Ipplepen marble. 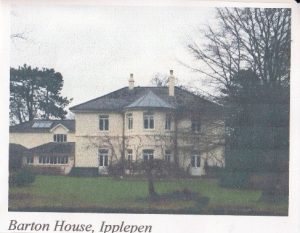 It seems likely that William Thorpe commissioned the building of the pump by S. Owens &co of London in honour of his father-in-law. By the 1880s the Barton quarries were no longer in use.

If you want to see a great collection of photos of our afternoon tea parties on VE day go to our website at www.ipplepenlocalhistory.org.uk/. Click on Flickr and select  Village Events and Societies section and then go to the Ipplepen Special Occasions album and remember to scroll along at the bottom to Pages 2,3 and 4. You will not be disappointed.