Like other organisations our AGM which was scheduled for July is having to be conducted online. Normally at these meetings I start setting out our plans for future events. Whilst accepting that nothing can be set in stone at present, we have decided to make our plans anyway and have provisionally booked Todd Gray for October this year, Alex Graeme for February next year and Colin Vosper for July 2021. We will see how this turns out, but it feels better to aim for normality.

If you are familiar with my monthly musings in these pages you will be aware that I regularly cite Reg Honeywill as one of my sources. Reg was a very keen local historian and a wonderful chronicler of Ipplepen life. We have some of his beautifully handwritten notes and I have often been impressed by how accurate he was – for example he would not have been surprised by the archaeological findings at Dainton. However, in one of his pieces which I recently unearthed, Reg makes a few statements with which I would have to take issue. I would be interested to know what you think.

The first one is easy. He states that the Wesleyan Chapel was built in 1842 but I am confident that it was 1865.

Secondly, he says that the village pump was provided by Mr. Field of Church House. Well as I explained in the previous magazine the pump was supplied to honour the memory of William Field, a master marble mason, of Barton House.

Thirdly, he writes of a tunnel from the Priory which travelled under the Catholic Church (modern day St. Mary’s Close) and ends at Penrae in East Street. This tunnel he insisted still exists from Penrae to St. Mary’s Close but is blocked for the rest of the route. I have my doubts but maybe you know better. 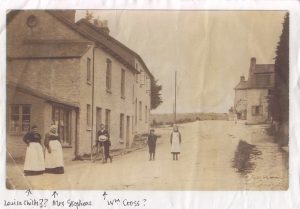 Wot no Newhayes? Somewhere around 1910 I would guess.