We were scheduled to have our VE day Celebrations this month. VE day stands for Victory in Europe and since this year marks the 75th anniversary of the event the government had moved the early May Day Bank Holiday to Friday May 8th. Numerous commemorative activities had been planned across the country and in Ipplepen a whole day of celebrations had been organised for the Friday Bank Holiday to bring the village together for some fun activities in the village hall and in the park. Unfortunately, due to the Coronavirus epidemic the Parish Council has decided to postpone the VE day celebrations.

The Local History Group had been planning to have an archive display in the Hall using some of our photos from wartime. Since we are unable to do this at the present time, we thought it might be appropriate to share some of the images and documents that we have.

First up are two pictures of Ipplepen’s street party from 1945: – 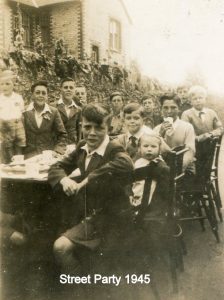 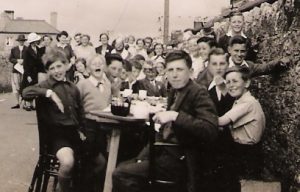 We are fortunate to have several first hand accounts of events in Ipplepen during the Second World War. As part of the planned VE day celebrations in Ipplepen the Parish Council was seeking members of the older generation to speak about their experiences during the war. To have had any meaningful experiences of the war years you would have to into your eighties and to have played any active part into your nineties.

Max Emburey has passed on to us some of his memories of wartime in the village:-

Max was 16 in 1940 and he remembers being part of a Territorial Army unit meeting in Drill Hall, Avenue Road, Newton Abbot. The TA unit had weapons and he can remember coming out to the villages with the TA to instruct the LDV (Home Guard) in the use of weapons because initially they had none.

Young cadets like Max were able to train Home Guard units. He would go out in the early evening. If he went to Abbotskerswell it was to the Cider Mill, if Broadhempston it was the Village Hall and in Ipplepen the training took place in the Scout Hut. He remembers bringing out the Vickers Machine Gun. Plenty of the LDV members in the villages were ex-WW1 men. Some of the officers in the TA brought their equipment out in the back of their cars.

By 1941 when Max was 17 and when they had more equpment they would practise on Sundays in the quarries – Zig zag and Coleshill – with tommy guns, sten guns, grenades and rifles. This type of active training was supplepented with aircraft recogniton and the use of field telephones.

On occasions he remembers full exercises on Orley Common. Later on in 1941 Max was with the the Royal Observer Corps. He recalls Newton Abbot station being bombed. After the bombing at Newton Abbot station he recalls feeding the wounded. By 1942 Max had joined up and he rose to become a Tank commander.

The Home Guard in Ipplepen 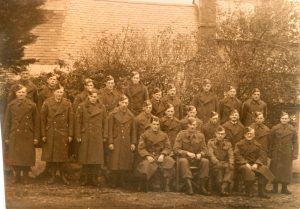 Another excellent first-hand account of life in Ipplepen during the war years comes from Marion Eastley. Marion was brought up in Ipplepen. She lived on the site of the current medical centre.

She started school in the Church Hall in 1940 when she was five years old. The Church Hall was being used as a school because of the arrival of the evacuees. It was not too long before they transferred back to the Methodist School Rooms.

Marion remembers that whenever the air raid warning sounded the children had to leave school and go to a house nearby taking their gas masks with them. She recalls one day two American soldiers visited the school and they did some marching in the boys’ playground.

On one day whilst at home she heard the roar of German aircraft overhead and the sound of machine guns and shrapnel which went through one side of her bedroom ceiling and out the other side leaving shrapnel in the room. Some of the headstones in the Church yard were damaged.

She recalls buying 1d sugar buns from Mr. Medland, the baker, and taking their sweet coupons to get rations from Misses Susie and Mary Cowling who kept a shop in Bridge Street. A special treat was when Mr. Langworthy at the Co-op had oranges and you would use your ration books to get your quota.

Below is a copy of the Ipplepen School Logbook in the year before Marion started. As you can see there are references to gas masks, evacuees and Air Raid precautions. As you might expect life continued as normal for the most part but there were food restrictions dealt with by rationing  There were evacuees at the beginning of the war and towards the end of the conflict American soldiers billeted all over South Devon in the time running up to the D day landings. Then there was the ever-present danger of enemy aircraft who as we know bombed Exeter and Plymouth extensively as well as incidents in Torquay and in Dartmouth

The later to be celebrated novelist John Fowles (the French Lieutenant’s Woman and The Magus) stayed here as a boy during the conflict living in Croft Road. In the opening chapter of his semi-autographic novel ‘Daniel Martin’ he describes working in the fields at harvest time on a hot August day in 1942 and there are references to sirens in Torquay and a German Heinkel aircraft passing overhead. His father Robert later became second-in-command of the Ipplepen Home Guard and young John was set the task of cleaning all the unit’s rifles.

Living through our current crisis we can gain some empathy and understanding of the restrictions and changes imposed on everyday life and how much people looked forward to a release and a return to normality. 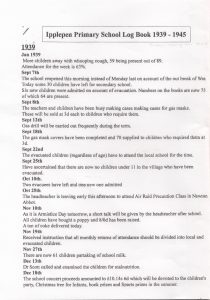 Finally, here are a few more pictures which give a flavour of those unusual times. 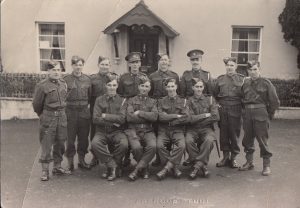 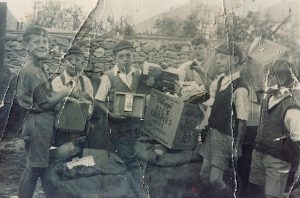 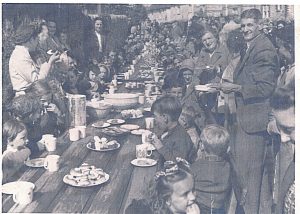