The Evergreens
Recently we received the minutes and records of another one of Ipplepen’s most loved organisations. The inaugural meeting of the club that came to be known as the Evergreens was held in the Church Hall on August 26th, 1952, thanks to community donations of £1 19s 4d. The club ran for another 69 years before final disbanding in 2021. It is not the only club in Ipplepen to have disbanded in this time. I can think of the Good Companions and the Ramblers and there must have been others over the years. Lest we become too down beat about this we should, at the same time, acknowledge that other clubs like the Gardening Club and the Film Club have stablished themselves since and there are plenty of organisations like the Carnival Club, the Cottage Garden Society and the Drama Club which continue to thrive. Many other long-term residents can also point to the transformation of the sports facilities for tennis, bowls, football and cricket and the splendid play facilities for youngsters up at the park.

Much of the material that we have in our archive represent chunks of social history which speak volumes about changing times. The Open Meeting held in the Church Hall was about forming a club in the village for elderly people. The definition of elderly was held to be anyone over the age of fifty. A committee was formed with Mr. Basil Webber as President, the Vicar as Chairman and Mr. Harold Luscombe as Vice-Chairman. The Secretary was Mrs. Baker and the Treasurer, Mr. Stone.
In 2012 the Evergreens celebrated their diamond anniversary and were in receipt of a congratulatory letter from Buckingham Palace. Through the years they stuck to their core aims of holding talks, arranging coach trips, having lunches but, most importantly of all, providing a space where friends can have a chat over a cup of tea and a biscuit or two.
I am indebted to Melvin and Doreen Carter and Margaret Bartlett for this month’s article.
John Marsh 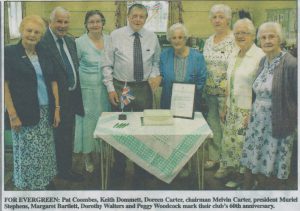