Talks: At the end of February, we were treated to an excellent talk by Alex Graeme from Devon Unique Tours. The event was well attended, and Alex provided a good-humoured and informative guide to the background of Arthur Conan Doyle’s ‘Hound of the Baskervilles’. It helps when you have an Ipplepen link and the Ipplepen link was the name Baskerville.
Henry Baskerville was born in 1871 and lived variously in Ipplepen at Smerdons Lane (Croft Road), Credefords, and Wesley Cottages. In 1886 Joseph Robinson employed Henry Baskerville at Park Hill House as a domestic servant. By 1891 he was a coachman and later became Head Coachman with an assistant to help him. In May 1901 Henry collected Arthur Conan Doyle from Newton Abbot Railway Station. He later drove the author and his friend, Bertram Fletcher Robinson, across the moors to research the developing story. 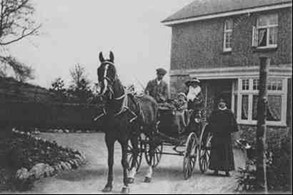 From Ipplepen Alex took us up to the picturesque ruins of the Buckfastleigh Church of the Holy Trinity. Long since associated with evil the Church has suffered two major arson attacks. It is home to the reinforced tomb of Squire Richard Cabel. Legend has it that when he was buried in 1677 a phantom pack of hounds came baying across the moors to howl at his tomb. This story, no doubt, fired Conan Doyle’s imagination and when he was taken by Fletcher Robinson and Baskerville to the remote and beautiful landscape of Fox Tor Mires Alex made a good case for suggesting that this setting would be transformed by Conan Doyle into the Great Grimpen Mire.
News: Following our Coffee Morning in March our next event for your diary is Professor Stephen Rippon on May 9th. Many of you will remember Professor Rippon as the leading archaeologist on the Ipplepen Dig and he would like to update everyone about the findings and some of the conclusions drawn from this project. This would be a welcome return to the village, and I am sure that you who followed the course of the Dig will be keen to hear what Professor Rippon has to say.
Points of Interest: Last month we paid tribute to the Evergreens. We have also received, courtesy of Peter Bevan, some interesting archive material about Ipplepen’s Twinning Association. Did you know that the Twinning Association made their first contact with Soliers in Normandy in May 1986? On that first journey were Mr. Deacon, Mrs Gerrey, Mrs Reidy and Mr. Aspland.