Beating the Bounds
The tradition of Beating the Bounds stems from a time when people prayed for a blessing on their crops. The period before Ascension Day (the 5th Thursday after Easter) called ‘Rogation’ involved an annual procession or ’perambulation’ around the parish boundary. In the days before good maps, it reminded everybody where the boundaries were.
As in most parts of the country the custom fell into disuse in Ipplepen, but it was revived in 1910 and thereafter in 1950, 1971, 1994, 2000, 2008 and 2015. A great deal of organisation is required but it is one of those events where people of all ages join in. The tradition included beating the boundary marks with willow wands, but the twentieth century version saw young boys of the village playfully ‘beaten’ or ducked in streams and ponds. 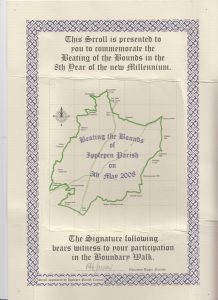 This map dates from 2008 and over the next few months I shall pick out a spot on the outer fringes of our village bounds and provide a little background starting this month with Red Post at the southernmost tip of our parish.
Red Post
There are some theories about why some signposts were painted red.
• To help illiterate prison guards escorting convicts to ports for transportation to Australia to find their way to places to stay for the night.
• To mark the site of a gallows or a gibbet
There are three in Somerset, three in Dorset, one in Cornwall, one in London and one in Devon on the A381 between Totnes and Ipplepen.
The site of our gallows stands in a field near Wrigwell Cross called ‘Forches’ which means gallows so if it was the site of gallows maybe it was serving Totnes or Broadhempston rather than us.