Forde House
A group of over twenty of our members recently enjoyed a splendid tour of Old Forde House in Newton Abbot. Under the assured guidance of our tour host Michael Martin we were informed and entertained in equal measures. The most common reaction from tour party members was surprise that we tend to overlook or take for granted this historical gem right on our doorstep. Unlike some other more well-known estates Forde House can genuinely boast of their high status visitors. Many of us are aware of the William of Orange connection in 1688 on route from Brixham to London but less celebrated perhaps were the three night stay of King Charles 1 in 1625 and the accommodation offered to Oliver Cromwell and General Fairfax in 1646. The house that we see now dates from 1610 and was the home of Sir Richard Reynell and his wife, Lucy Brandon. It is now noted for its fine wood-carving and plasterwork and, since it has become engulfed by the industrial estate and the adjacent Council Offices, it was instructive to pause and reflect on how the house and its surroundings must have appeared over four hundred years ago. Set close to an ancient and very significant crossing point or ford over the River Teign this manor house of the parish of Wolborough commanded a strategically important position for those who were travelling further west. If you should like to visit the house then contact the current owners who are Teignbridge District Council.
Ipplepen Shops
Just to conclude our excursion round the old shops of Ipplepen we can move up Fore Street where on the left hand side there used to be the Stephens Grocery store run by Elizabeth Stephens and then later by her daughter Laura Childs. This store became a chemist’s for a short time before closing in the 1970s.
Barnfield Stores at Number 2 Bowden Road was built as part of the Barn Park estate in 1966. It was set up as a general grocery store and was run by Pete Newbold until it closed in 2000.
And finally how could we forget Victor Elliott’s butchers shop on the site of Osborn Close which closed in 2001.
The site of Stephens’ Grocery Store 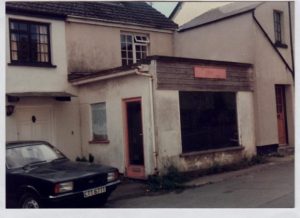