Talk at the Village Hall
On the opening day of the lockdown restrictions easing, we were able to take advantage by having our first talk at the Village Hall for eighteen months. Our guest speaker was Colin Vosper, and he took us through the marvels of the Devon Marble Industry of the nineteenth century which created fortunes for some and left us with a legacy in churches, country houses and public memorials. Ipplepen played its part in this industry alongside Ashburton, East Ogwell and Torquay locally. It was a great boost to see such a good attendance at the talk which followed our AGM.
Lanterns
Many of you will be pleased to hear that we are planning to hold the St. Andrew’s Lantern Festival in November. We are aiming to combine the traditional parade through the village on the evening of Saturday November 27th gathering at the Church afterwards with a repeat of our ‘Window Wanderland’ theme from last year for the whole weekend. So, when Autumn starts creeping on it’s time to get creative and start thinking of light and sparkle.
Prebendary Robert Duins Cooke, Vicar of Ipplepen 1897-1940 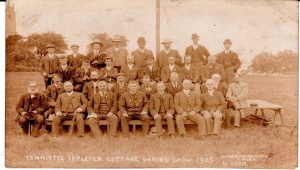 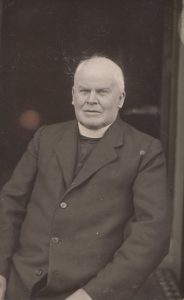 Following on from last month and Sir William Petre my second choice for a notable person from our area comes from the more recent past and this month I have chosen Reverend Cooke.
When we first moved to Ipplepen in 1984 we lived in Cooke Drive. Like many of the roads in our village it is named after a well-known local figure and later I learnt that Cooke Drive is named after Reverend Cooke. It was not till much later, though, when we started working on the village archive that we became more familiar with Rev. Cooke. It is his face that stands out more often than any other in photographs from the earlier part of last century.
We see Rev. Cooke in a charabanc, or accompanying the cricket team or, as the picture above shows, with the Cottage Garden Show committee. He was such a constant presence that we wanted to find a little more about him. Our research has been helped enormously by talking to Fiona Muddeman who still lives in the village. Fiona is the Reverend Cooke’s granddaughter, and she was delighted to pass on her family knowledge of this much-loved figure.
Robert Duins Cooke was born in North Devon in 1860. He attended St. John’s College, Cambridge, and, after graduating, was drawn to a career in the Church. He was ordained at Ripon Cathedral in 1883 and then spent two years as a curate at Haworth (home of the Bronte sisters). In his mid-twenties and, already married, he returned to Devon taking up a living at St. Mark’s Church in Torquay. There he stayed for twelve years before moving to Ipplepen in 1897. After this he never moved again enjoying the life of a country vicar until he died in 1940 having given forty-three years’ service to the village.
There were three sons and a daughter brought up at the vicarage on Orley Road. His eldest son, Harry, became a vicar himself at Princetown, then Kingsteignton and, finally, Seaton. One of his grandsons, Dorian Cooke, was a wartime MI6 operative based in Zagreb who later became Head of the Yugoslavia section at the BBC. Involving himself in all aspects of village life the Reverend Cooke had an impact on all those who encountered him. Near the end of his life, he was made a prebendary by the Bishop of Exeter to express the ‘appreciation of the diocese for all long and faithful ministry served in one parish by many clergy of whom the Vicar of Ipplepen is the most conspicuous example’.
The eulogies at his funeral and the obituaries bear testament to the respect in which he was held.
‘In the late Rev. Robert Cooke, the village of Ipplepen had the kind of vicar which so many country parishes pray for but seldom get’
‘His crowning gift was his sound common sense’
‘He never expected anybody to do a job which he was not prepared to do himself’
Clearly the Rev. Cooke worked tirelessly for the good of the village serving on the Cottage Garden Society, acting as President of the Cricket Club and Chairman of the School Managers. The History Group still make use of his booklet ‘Notes on the Church and Parish of Ipplepen’ written in 1924 and he fully deserves to be remembered as one of our most notable people.
John Marsh