Beating the Bounds
This is the fourth and final part of our route round the compass points of our parish boundary. We started with Red Post in the South which borders on Totnes and then, to the west, Ambrook bordering on Broadhempston and in last month’s edition at the northern tip and bordering on Denbury we had Dornafield. So, by process of elimination, we have reached the east bordering on Marldon and there we have Bickley Mill and Bulleigh Barton. 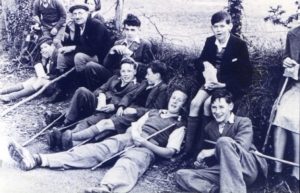 Bulleigh Barton
On the Beating the Bounds route we often stop in the Bickley Mill car park for refreshments. Sustenance is needed at this stage because not long afterwards we are climbing the steep Moretons Hill which gives us an excellent view of Bulleigh Barton whilst you are catching your breath.
Bulleigh Barton is referred to in the Domesday Book as ‘Bolhay’ and was probably of wooden construction. The current building dates from the fifteenth century and it was first registered in 1638 when sold to the Brooking family, merchants from Plymouth, to pay for civil war debts. There were to be six generations of the Brooking family associated with Bulleigh. Their main activities were in Dartmouth after Nicholas Brooking married into a family of rich Dartmouth merchants. There seemed to be some neglect because by 1791 it was said to be going to decay. By 1824 the Symons family were renting the property from the Brookings. We know that by 1843 the Reverend Nicholas Brooking had bought the rights to be Rector of Ipplepen and in 1850 he was living in the Rectory (now the Priory) whilst Bulleigh was farmed by Edward Symons.
Later in 1859 the Brookings sold the estate. A hundred years later in 1959 the four cottages, farm buildings and 223 acres of land were sold for £30,000. Bulleigh Barton was bought by Mark and Liz Lamport in 2011.
Besides being of some general interest my focus on Beating the Bounds has been part of the preparations for our next village beating the Bounds planned for 2022. Planning for anything has been fraught with difficulty for so long but assuming the recovery continues it would be fitting if it goes ahead next year and maybe all those of you who have discovered new reserves of energy with your walks around the village will feel buoyed up for the challenge
John Marsh