Our first talk of the New Year is scheduled to take place on MONDAY FEBRUARY 24th at 7.30pm in the Village Hall.

Our guest speaker is the Rev. Nicholas Pearkes, former rector of Littlehempston. Now retired the Rev. Pearkes has a good reputation as a speaker for local history groups. His interests are many and varied. Some of you may remember him from his previous talks of for his enthusiastic participation in each of the archaeological digs at Dainton. He enjoys metal detecting and has an ongoing project to build a hovercraft! For our February talk he has decided to merge two themes. One is the about boot making in Ipplepen and Broadhempston and the other is about his role in the ROC during the period of the Cold War.

From the Archive
I thought I would feature some of our sports teams over the next few months. First up is the Men’s Bowls Team from 1984. Ladies you will get your turn next month 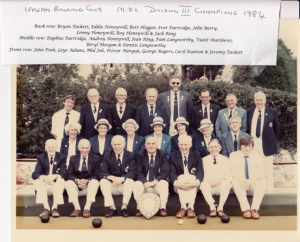