There was an excellent turnout at the Village Hall for Professor Rippon’s update on Ipplepen’s archaeological dig. The original excavation dates back to 2010 and a picture has emerged of continuous occupation of the site from the Iron Age right up to the 7th century AD. At some point after that in the Saxon era the site was abandoned and our current settlement replaced it. The existence of the high status Roman road running through the settlement has contributed to a greater awareness of the extent of Roman trade routes into Devon. Although the inhabitants never truly became Romano-Britons there is evidence that they were not averse to sampling some luxury Roman produce. Digs will continue until 2020 and with new finds every year we are learning so much about how our village was once connected to the Roman Empire.

Such is the interest in the finds that Torquay Museum is holding an exhibition entitled Ipplepen – New Discoveries on the Edge of the Roman Empire. This exhibition is set to run from March 16th to September 8th and should be well worth a look.

To continue my series on Ipplepen Shops let’s move on to North Street.

This shop is listed in the 1901 Census as a Grocery and was owned by William Luscombe. It subsequently became the Doctor’s surgery. This building was demolished in the 1960s to widen the road.

This was the Village Bakery. It had several owners over the years as the old Methodist chapel at the back of the shop became the bakery. Owners included Ann Luscombe, the Medland family, Ernest Barton from around 1945/6, the Marsh family and finally Martin and Wendy Jensen who are fondly remembered for the Danish Bakery. 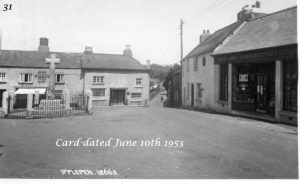